Father Dickson whose Blog 'Catholic Collar and Tie' I read on a regular basis writes on his experience with the traditional Mass: 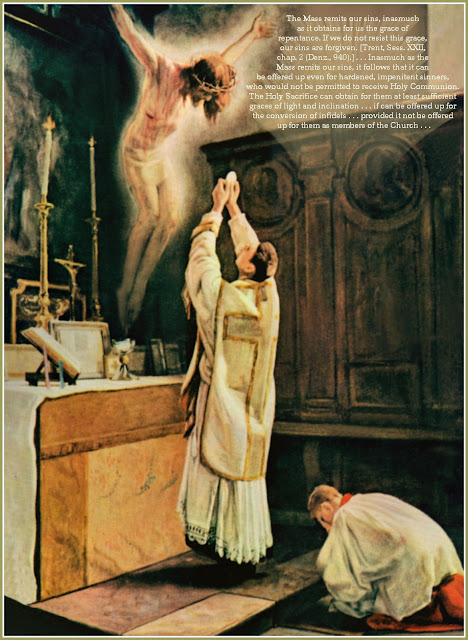 What the Traditional Mass Did With Me

Having converted to the Faith some 33 years ago all I ever knew was theNovus Ordo. I had been well instructed, so I knew the Mass to be the Sacrifice of Calvary re-present-ed, and I knew the Holy Eucharist to be the Lord Himself, but I had never even heard of another form of Mass until a lady in our congregation asked me to go with her to a local hotel where the ‘old Low Mass’ was being celebrated in conjunction with the SSPX. It was certainly different and was more demanding: we were not led by the hand via constant dialogue. Not until I entered seminary did I discover the liturgy (and therefore the Mass) was used as a kind of flag-waving exercise (surely an odious attitude). I discovered it only having been allocated my ‘group’ (seminarians from each year being placed in ‘groups’ led by a faculty member). Each of these groups took it in turns to arrange and serve the liturgy for one week, some taking the opportunity to use Missa De Angelis; others to sing ditties. In this the liturgy became a kind of political focus rather than a purely spiritual event.
From first year onwards until my after ordination I was given the opportunity to work with the Day Pilgrim service in Lourdes. While there I saw the kind of ‘Youth Mass’ that was planned like a performance and which turned me off doing anything outside the rubrics. Of course I had to celebrate school Masses where they played pop songs or skits performed for the Gospel. I was never at ease with such things but thought that as a curate (assistant priest) I had no real say in what would be done. When I was appointed a Parish Priest (Pastor) for the first time some 12 years ago I ensured that we engaged the youngsters by having them introduce the Mass, proclaim the readings, lead the General Intercessions and provide the music. We kept mimes and pop music until Mass had ended or for paraliturgies.
Then, about ten years ago now, a priest friend asked me to celebrate his Traditional Mass while he was away on holiday. I worked hard over two weeks to study the rubrics (I still made mistakes the first few times) and discovered the Mass a-new. I was aware that this was the Rite known to St Dominic, St Francis, St Ignatius, St Alphonsus, St Gregory and to my favourite Popes, St Pius X and Pius XII. I suddenly felt a deep need to be personally holy in order to celebrate such a venerable Rite.
Now it is not that the Holy Sacrifice is less holy or requires less reverence in the Novus Ordo, but that I did not experience that requirement since it was celebrated it with folk-style music, laughter, applause etc. Beneath these the sense of the sacred seemed all but lost. We were trying to engage the people it is true, but we were doing so by mere activity rather than active contemplation (I thus became very uncomfortable with concelebrated Masses because I never knew with what I would be presented). A major awakening occurred for me when I came to celebrate the Traditional Rite: we weresinging the Mass, not singing at Mass, and it was not the kind of music I would hear on the radio. The chant had an altogether different, even ethereal quality, and was sung in a language that united all people in every land at every time in one common voice of praise. From its very opening, the Traditional Rite did not seem open to a loss of the sense of the sacred: I was, even before approaching the altar, asking God ‘who gives joy to my youth’ to send forth His light and His truth; I was encouraging myself:  ‘why groan within’; ‘hope in Him, my Saviour and my God’; I was asking Him ‘have mercy’, to ‘grant absolution and remission of our sin’. It occurred to me that in the Novus Ordo I approach the altar as if by right rather than by grace. It also occurred to me that I could ‘rest’ in the Traditional Rite -I no longer had to be careful of facial expressions or tone of voice, for I was facing the Lord and ‘whispering the sacred words into his ear’. I was learning here that I could not only reverence the Eucharist Itself, but the liturgy; the clothing with dressed and presented.

The most profound effect of learning the Traditional Rite was not that it brought me to offer every Mass well, which it did, but that knowing this was the Rite loved by the saints of the centuries, defended by the martyrs and hallowed by time, it seem to require me to seek a new depth of holiness which, though I daily fail, I yet strive to achieve by making gains in patience, humility, generosity, industry and courage.
Posted by Fr Dickson at 15:42
Email ThisBlogThis!Share to TwitterShare to Facebook
Posted by ServusMariaeN at 1:36 PM