MOST HOLY FATHER PLEASE BRING BACK THE TRIREGNUM! 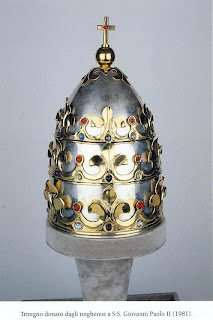 The above photo is of the "Triregnum" papal tiara that was given as a gift to his holiness Pope John Paul II by the Hungarian people.


I have for a very long time (since childhood & I'm 41) lamented the fact that his holiness Pope Paul VI symbolically laid the "Triregnum" papal tiara aside. Although I understand the reasoning behind this move, I along with many others feel that in our own humble opinion this great tradition should be revived. Pope Paul VI provided for in his 1975 "Romano Pontifici Eligendo" that his successors be crowned in a coronation ceremony. Alas subsequent Pontiffs have chosen to follow John Paul I in his choice of a "Papal Inauguration" ceremony instead of a "coronation". It was both disheartening and surprising to read recently that his holiness John Paul II had received in 1981 from the Hungarian people a Tiara as a gift. What a precious gift from a once deeply Catholic nation and how sad that it was probably never worn! I had very much hoped when the words "habemus Papam" rang out in St. Peter's square in April of 2005 that the newly elected Pontiff would choose the venerable tradition of a papal coronation complete with the "triregnum". Many of us were disappointed when this was not the case but I don't think any of us were surprised by it. The rich symbolism of the "triregnum" proved for whatever reason(s) to be too much a reminder perhaps for the post conciliar pontiffs of a more "triumphalist" age of the papacy and papal temporal power. However those of us who proudly lable ourselves as Traditional Catholics hold this venerable tradition of a papal tiara in high esteem. I think I speak for many if not most Traditional Catholics who greatly lament that this tradition has fallen into disuse. Unfortunately, one hears precious little today regarding the social kingship of Jesus Christ from most pulpits. I would go so far to say that even the mention of the social kingship of Jesus Christ is as so eloquently put forth in Pius XI "Quas Primas" would be a source of embarrassment for many of our shepherds. Christ as KING seems to the modernist post conciliar Catholic to be hopelessly "old fashioned" and "outdated". Perhaps the revival of the use of the "Triregnum" with it's rich kingly symbolism will revive the duty of all Catholics to work toward the social Kingship of Jesus Christ as king of all hearts.

I've searched the internet high and low for quite some time looking for a blog or "petition" of sorts to present to our Holy Father to humbly beg him to revive the use of the "Triregnum" to no avail. It was suggested that I start one such project. I was unsure how to begin such a task but I hope with this humble blog to begin a movement of petition and prayer to the Holy Father. I humbly request any and all who read this to begin to offer a rosary a week not just for this particular intention (the Triregnum) but more broadly for a return to tradition and continuity above all in the sacred liturgy by all Catholics. I should like to make this endeavor a "grass roots movement of prayer & petition for Tradition & Continuity". Any commentary, suggestions or discussion in this regard will be gratefully appreciated. I should like to begin a petition. Would anyone of you perhaps wish to draft one such petition to the holy father?
Posted by ServusMariaeN at 11:07 AM 2 comments: