November 11th is Martinmas, the Feast of Saint Martin of Tours

In German-speaking Europe, Martinmas is usually celebrated by children making paper lanterns with candles, and carrying them in procession, while singing songs in honor of the Saint, behind a man dressed as a Roman Soldier (Saint Martin) - and the beggar with whom he shared his cloak, later revealed to be Christ. 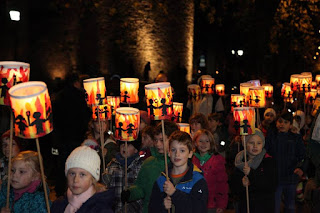 He was born in the Roman province of Pannonia (approximately, the western half of modern Hungary) in about 316 and was educated at Pavia in Italy. He was baptized, left the army and after spending some time as a hermit on an island off the Ligurian coast, founded a monastery at Ligugé in western France, where he lived a monastic life guided by Saint Hilary. Later, he was ordained a priest and became bishop of Tours. In his actions, he gave an example of what a good shepherd should be. He founded other monasteries, educated the clergy, and preached the Gospel to the poor. He died in 397. 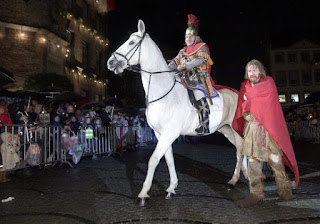 The famous story about St Martin is that while a soldier in Amiens he gave half of his military cloak to a beggar and later had a dream in which the beggar revealed himself as Christ. 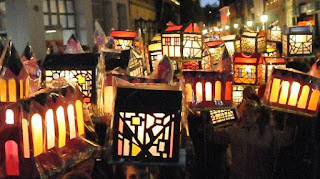 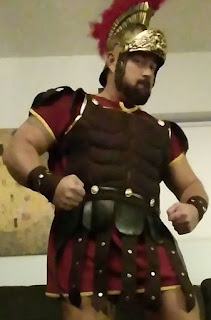 Posted by ServusMariaeN at 3:20 PM